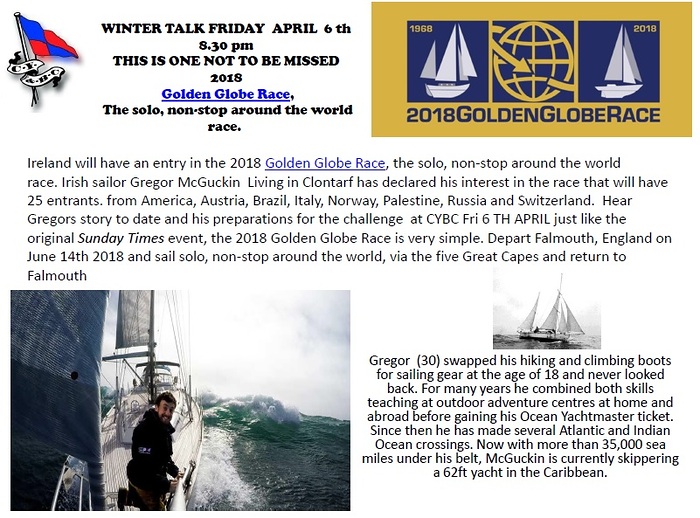 Ireland will have an entry in the 2018 Golden Globe Race, the solo, non-stop around the world race. Irish sailor Gregor McGuckin Living in Clontarf has declared his interest in the race that will have 25 entrants. from America, Austria, Brazil, Italy, Norway, Palestine, Russia and Switzerland. Hear Gregor's story to date and his preparations for the challenge at CY&BC Fri 6 TH APRIL just like the original Sunday Times event, the 2018 Golden Globe Race is very simple. Depart Falmouth, England on June 14th 2018 and sail solo, non-stop around the world, via the five Great Capes and return to Falmouth

Gregor McGuckin (31) is attempting the gruelling feat of becoming the first Irish man to sail non-stop single handed around the world using no modern technology in the upcoming Golden Globe Race.

In 150 days, Gregor will set sail from Les Sables D'Olonne, France in what is one of sailing's most extreme races. Competitors are restricted to 1960s technology meaning no GPS, no FaceTime, no iPod and no Kindle.

As one of the youngest competitors, Gregor will compete against 24 other sailors using just a compass, the moon and stars to guide him around the world.

"To be the first Irish person to sail around the world solo non-stop will be an amazing achievement, but I wholly believe that I have skill and determination to win the entire race," said McGuckin.

Only 200 people have successfully sailed solo around Cape Horn, but for Gregor the biggest challenge will be surviving 270 days alone at sea and making sure that his boat can withstand the treacherous conditions.

Certainly, Gregorif he can complete the voyage, will join the ranks of few Irishmen to complete the solo circumnavigation – with stops and without –The greatest challenge will not only be surviving without seeing another human being for nine months but finding the funding to make sure my boat is competitive as possible and can withstand the most extreme of storms."

Gregor will have to carry all his food for nine months and find ways to catch rainwater to drink. He'll have a sealed box with GPS in case of emergencies, but if he opens it he'll be instantly disqualified.

There will be no communication with the outside world, only occasional communications with boats within radio distance and a weekly check in with the race centre.

2018 marks the 50-year anniversary of the Golden Globe Race, and only the second time in history that such a race has been attempted. 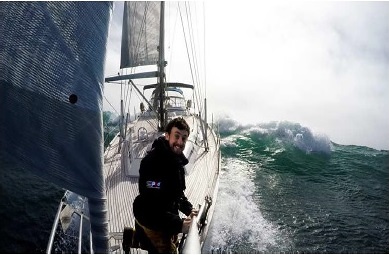 Gregor (30) swapped his hiking and climbing boots for sailing gear at the age of 18 and never looked back. For many years he combined both skills teaching at outdoor adventure centres at home and abroad before gaining his Ocean Yachtmaster ticket. Since then he has made several Atlantic and Indian Ocean crossings. Now with more than 35,000 sea miles under his belt, McGuckin is currently skippering a 62ft yacht in the Caribbean. 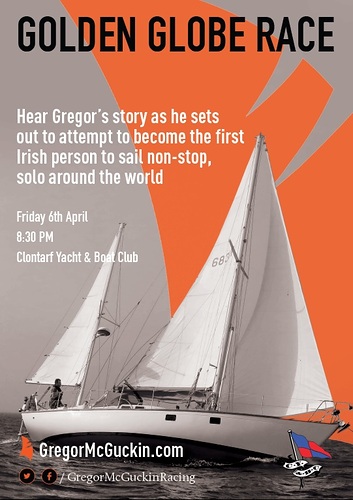