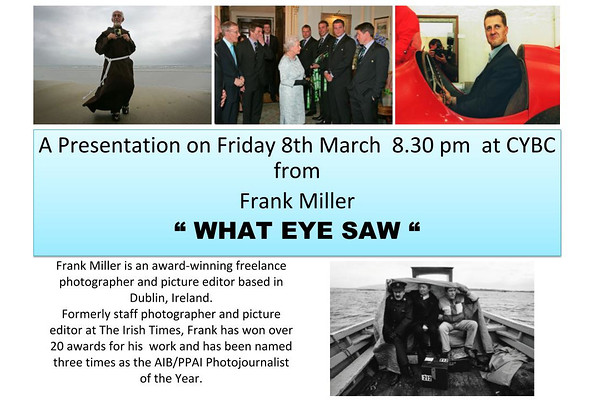 A Presentation on Friday 8th March 8.30pm at CYBC from

Major assignments at home and abroad have included coverage of famine in Sudan, the genocide in Rwanda, the Kurdish crises following the Gulf War, the Diana funeral, the impact of tourism on the temples of Angkor, Cambodia and an examination of the plight of Palestinian refugees in Lebanon. In 2011 with the support of a grant from the Simon Cumbers Fund Miller completed a photo reporting assignment Minority Report on the situation of the Hmong minority on the border of Vietnam, published in the Irish Times magazine, with images exhibited at the Irish Aid centre in Dublin - http://www.irishtimes.com/life-and-style/people/minority-report-1.11082. In 2014 with writer Rosita Boland he completed a major photo feature on the massive migration crisis in the Mediterranean - http://www.irishtimes.com/news/world/europe/journeys-of-death-boat-people-of-the-southern-mediterranean-1.1950857. More recently with writer Lorna Siggins he produced a magazine photo story on the Irish connections with Montserrat in the West Indies - http://www.irishtimes.com/life-and-style/generation-emigration/the-caribbean-irish-the-other-emerald-isle-1.2610681.

Miller has twice represented Ireland at the Fujifilm European Press Photographer of the Year awards. He has lectured and served as an external examiner for the Diploma in Professional Photography course at Dun Laoghaire College of Art Design and Technology and has taught an advanced photojournalism course as visiting lecturer at Dublin City University.