Tim, a retired Journalist from Ardglass, began his Sailing Career at Clontarf Yacht & Boat and this inspired him to travel further afield on an exciting adventure, 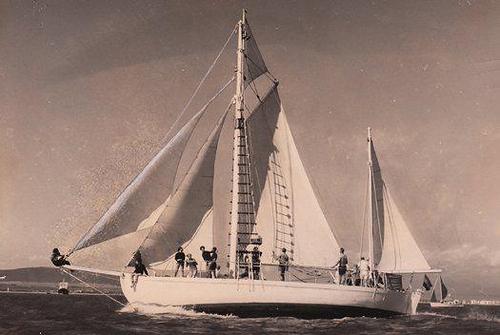 This Film tells the story of six spirited adventurers – five young men and a woman – who refitted a battered 50 year old ketch in Durban and sailed her westward; through the islands of the Atlantic, Pacific and Indian; around the world in 627 days. The disk is sold as film maker and crewman Barry Cullen designed it in 1990 after he transferred the original 1967 vintage 16mm movie to digital. For those who love sailing it is a collectors item … and for those who do not understand why people sail … this will have you hooked.

It is quite simply a beautifully told story. In 1913 Sandefjord was launched at Risör, Norway, the 28th ketch built for the Norwegian Lifeboat Society. These sturdy wooden sailing craft, designed by the legendary Colin Archer, were built to put to sea at the first sign of a storm and to assist vessels in distress. During her 22 years' service, Sandefjord was attributed with saving 117 lives and assisting 258 vessels through fog and storm to safety.

After being sold out of the lifeboat service in 1935 she was owned and sailed, first by Norwegian Erling Tambs who completed three Transatlantic passages in her and later, in the care of Tilly Penso, she sailed under the burgee of the Royal Cape Yacht Club for almost 25 years. Sold out of his estate in 1961, the ketch passed through a quick succession of owners, the last of whom all but abandoned her as a rotting hulk in Durban.It was a desperately sad shadow of the once proud and gallant Sandefjord that was found, half sunk at her moorings by the Durban brothers Barry and Patrick Cullen in 1963. The task of refitting her required almost two years of hard work before she was ready for sea. She was taken from the water, stripped of all doubtful planks and timbers and slowly restored to a state of complete seaworthiness.Finally, in February 1965, Sandefjord was ready. She was provisioned for 400 days and with her complement of five young men and a girl, she sailed from Durban on what proved to be her greatest adventure yet.